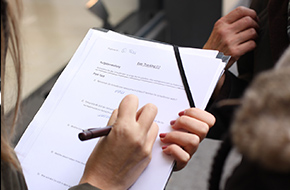 Part of the Federal Government’s Public System of Digital Bookkeeping program, eSocial is considered by many to be the most complex and ambitious component of this program. Its purpose is to promote the digital and scheduled consolidation of all social security and labor tax obligations.

The subject is no longer new for companies, it has been on the agenda of strategic HR meetings for a few years (the first mention of the subject appeared in 2007), its urgency was increasing as the deadlines and needs became more clear, until the version 2.1 of the regulation (last released), with the obligation still undefined (tends to be Jan / 2018, when made official).

In the past 3 years we have assisted several companiesto prepare for data transfer. The theme demands not only systemic adjustments, but also a processes review of the HR and other areas involved. With the intention of creating a more analytical view on the subject, we recently conducted a survey with several companies that have been facing this challenge.

Our perception that companies still mistakenly understand that this subject is predominantly technology oriented (system adequacy) was confirmed: 32% of the survey respondents have not yet started diagnosing their processes, but only 19% have not yet started IT diagnostics. This perception corroborates the fact that the vast majority of respondents (69%) consider that their companies are on the right path to comply with the scheduled dates, and some of them have not even taken into account the necessary process changes. We understand that, because it is a legal demand, companies tend to focus in simply adapt to the imposed needs, not investing in a complete review of the structure, way of handling information and in the execution of day processes, that will be strongly affected. We can cite as noted facts:

• The government will find it easier to apply penalties, as it will be able to cross-check information between different areas;
• Few organizations have become aware of the role of consolidating information sources and eliminating differences;
• In addition, few organizations have made efforts to review common items, as the existence of two or more processes that treat similar information differently may generate divergent records.

Data details collected by our survey are found in the summary below. If you have questions about the information presented here, or would like more information about eSocial and implications for your company, contact us.

Brazilian Companies adequacy to the eSocial government demand (Public System of Digital Bookkeeping) – data captured in the 1st semester of 2016. We divided the results into 4 categories for a better analysis of the information:

1. Information about the HR area;
2. Relationship between HR and other areas of the company;
3. Company adequacy to the eSocial requirements;
4. General information about respondents.

1. Information about the HR area

a. Performance profile of the HR area in the company: We identified that the focus of the HR area is similarly distribute between operational and tactical areas, but a smaller portion with more strategic focus. This predominant characteristic of acting closer to day-to-day life justifies, in a certain way, the tendency to focus on IT adjustments (the focus on structuring and reviewing tends to be a more strategic company decision).

The basic reading of these results shows us:
• 35% of respondents identified their HR areas as participants in strategic planning;
• 24% reported having a prominent role in the implementation of strategic planning actions, but this does not necessarily mean that they play an active role in defining the directions;
• 41% reported focusing on routine activities, sometimes participating in specific projects.

b. Average movements / month: We count in this indicator all movements reported on a monthly basis (leaves, dismissals, admissions, etc.), which allows us to analyze them in two ways:
• High number of movements: it will represent a greater complexity of adaptation within the deadlines required by eSocial (focused on meeting deadlines, for example, sending information about admissions until, at most, the day before the employee starts).
• Low number of movements: if they are of different types, they will add complexity to the process by making it difficult to standardize processes (no recurrence that justifies a closer monitoring and measurement process).

c. Area maturity level: process documentation: The existence and depth of details on the area’s process documentation says a lot about the structure of an operation: when fewer documented processes (from the flow to the details of procedures), the higher the risk of failure to execute. We identified, from the results obtained, that the vast majority (64%) have only part of their processes mapped, and some of them (29%) only at the macro level. Adequacy to eSocial, when carried out only from a systemic point of view, will bring high risks to organizations, as some processes may not have the necessary structure that allows the fulfillment of the dates foreseen by eSocial, or even two or more different ones processes may generate the same information with divergent content when sent to the bases of government agencies.

e. Satisfaction (processes and systems): As we have already discussed a few times during this analysis, we understand that the two main pillars worked on adapting the HR area to eSocial are Processes and Systems, and we identified that usually the focus of organizations is directed to the Systems component (both scope attention and investment availability). We found that the perception of companies’ satisfaction regarding systems and processes is balanced (around 50% for each side, divided by the “indifferent” group). This fact leads us to the conclusion that the eSocial theme is an excellent moment to give strength to initiatives that also review the processes pillar (given the importance considered by organizations), including in the scope of eSocial projects the review of all bases of activities HR and partner areas.

f. Level of updating of HR information: One of the main attention points of eSocial is the data analysis that will be conducted, upon receipt of the file, against the databases of government agencies (IRS, Caixa Econômica and Social Security). Any divergence in this analysis will result in the rejection of the registration and, consequently, non-compliance with deadlines by the company. Updating the registration is not a frequent and common practice of HRs (we identified that 76% of respondents confirm this fact), and simple items such as name changes due to marriage may cause problems for organizations in sending their information.

2. Relationship between HR and other company areas: Within a project of analysis and adaptation of companies to eSocial, some processes will invariably need adjustments (for not complying with 100% details of the legislation, or for the risk of divergent information). Several areas participate in the preparation of information for eSocial, many even submit complementary data – Workplace Safety, Payroll, Legal, among others. Good communication between these areas and the correct alignment of actions will guide the success of the necessary adjustments.

a. Relationship between HR and Occupational Safety: The Occupational Safety area is one of the main partners of the HR area in the processes that will be impacted by eSocial. We identified that the respondents understand that there are many GAPs of communication between the areas:
• 69% do not have a standardized information exchange process;
• 19% do it systematically.
This fact has the power to generate high organizational risk, since basic information such as Payroll and Leave, if not properly synchronized at the time of submission, may generate inconsistencies in the government’s bases and possible inspections and / or assessments.

c. Perception of process maturity in the related areas: The two areas most involved in eSocial processes (Workplace Safety and Legal) were assessed with a higher level of maturity, with 65% and 71% of processes designed. However, from the results, we can consider that all areas related in some way to the eSocial requirements have a good process maturity, which will facilitate the composition of the submitting information. The possible existing risk, similar to that presented for the relationship between HR and Workplace Safety, is fixed in the communication flows and processes between the areas (information transition).

We proposed a second direct question, with an inverted theme, to capture any divergences in perception (question: “What is your level of concern with the changes foreseen by the program?”). The result confirms the initial perception of the respondents (69% understand that they are on the right path).

b. Current phase of adequacy projects: When analyzing the responses to the phases of an eSocial adequacy project, step by step, we note that the perception of readiness does not reflect the reality of making necessary adjustments. Few companies reported completed diagnostic phases (38% for both Processes and IT). In addition, the responses clearly reinforce the great focus that companies have on technology: 32% of respondents did not start diagnosing processes, while only 19% did not start diagnosing IT. Another characteristic that we have identified is the fact that some companies have started to adjust their processes according to needs identified in IT diagnostics, without having completed or started the process diagnosis. This behavior tends to generate loosely structured solutions, focused on generating information but not on analyzing whether the process is being correctly executed.

Another important information refers to the version of eSocial manage by the adequacy projects. We were able to identify two important situations:
1. Many responsible for conducting these projects are unaware of the version under analysis;
2. Some companies are still working under version 2 of eSocial, when version 2.1 has already been released since mid-2015 (and we should still have new versions released in 2017).

c. Main results found in the diagnosis stage: Of the respondents who said they had already completed their diagnostic stages (38% of the total sample), and confirming previous perceptions, identified as a result the need for adjustments in processes (90%).

b. Billing: 83% of the responding companies, due to the billing characteristic, are mandatory in the first launch window, which should happen in January 2018 (companies with revenues greater than or equal to R $ 78 million in 2016). 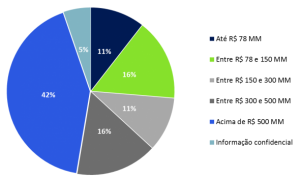 Receive our reflections by e-mail

About us
Clients
Contact
Intership Program
Reflections
Work with us

About us
Clients
Contact
Intership Program
Reflections
Work with us

Any cookies that may not be particularly necessary for the website to function and is used specifically to collect user personal data via analytics, ads, other embedded contents are termed as non-necessary cookies. It is mandatory to procure user consent prior to running these cookies on your website.